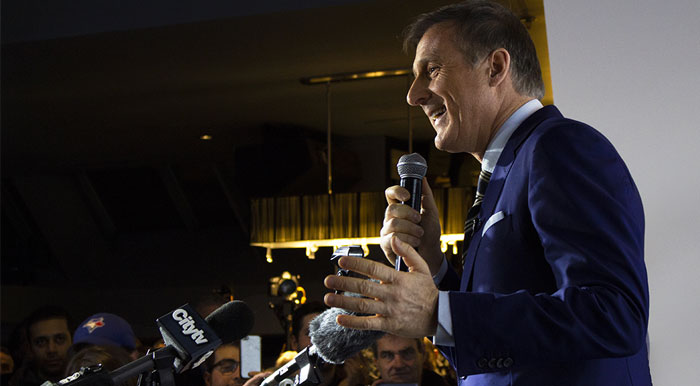 I am more convinced than ever that I made the right decision.

I said at the time that under Andrew Scheer’s leadership, the Conservative Party had become too morally and intellectually corrupt to be reformed.

Instead of articulating a coherent conservative vision, all he did was play identity politics, pander to ethnic and interest groups, and try to steal votes from the Liberals by proposing centre-left policies.

Andrew Scheer’s leadership has proven itself to be an utter failure.

The party now has a new leader who will follow the same strategy.

Erin O’Toole said early in this leadership campaign that Peter Mackay would turn the Conservative Party into the “Liberal-lite Party” if he wins. He was right.

What O’Toole did not say is that he, as leader, will do the same thing.

O’Toole and Mackay are like two peas in a pod. They are both establishment, centrist, globalist Red Tories.

The party’s establishment wanted a Red Tory leader. They got one.

O’Toole ran as a typical Red Tory three years ago. Nobody remembers anything from his bland campaign. No bold proposal, nothing to distinguish him from the rest of the pack.

This time he put on a “true blue” mask only for strategic reasons: to be the second choice of the less well-known candidates, Leslyn Lewis and Derek Sloan.

But I have a message for the supporters of these candidates: Don’t be fooled. He got what he wanted. The mask will fall now that he’s the leader. He will take your support for granted.

From now on, his main objective will be to steal centre-left votes from the Liberals. Not to advocate for real conservative principles and policies. He will revert to being the Red Tory he always was.

Under O’Toole, the Conservative Party will continue advocating for policies barely distinguishable from those of the Trudeau Liberals on issues that are crucial for Canada’s future.

The vast majority of Conservatives want an end to the mass immigration policy of the Liberals. It won’t happen under Erin O’Toole. He and the party’s establishment support mass immigration and official multiculturalism.

The vast majority of Conservatives don’t believe in climate alarmism and want an end to costly and inefficient green policies. Policies that have proven disastrous for Canada’s energy sector.

O’Toole will ignore them and instead court centre-left Liberal voters. He still wants to reach the unattainable Paris Accord targets. He says climate change “requires global solutions.”

In his platform, he promises to focus “on making industry pay rather than taxing ordinary Canadians, by forging a national industrial regulatory and pricing regime across the country.” Watch out. He will simply replace Trudeau’s carbon tax with other taxes, more green regulations and more subsidies.

Under the weak leadership of Andrew Scheer, the Conservatives said it would take at least five years to eliminate the $20-billion Liberal deficit of two years ago. Imagine that. Five years to cut $20 billion!

The vast majority of Conservatives want Canada first policies. They want a foreign policy that restores Canada’s national sovereignty. They want to stop sending our money to other countries, while millions of Canadians lost their jobs and suffer. They want to kick the United Nations out of Canada, along with its Paris Accord, its Global Compact on Migrations, and its socialist Sustainable Development Goals.

Erin O’Toole is a globalist, like the rest of Ottawa’s globalist establishment. As Conservative critic for foreign affairs, he said last year he wanted to restore ties with Saudi Arabia “by focusing on improving commercial ties and by offering more aid, development and refugee support in the Gulf region.”

Can you spot the difference between him and Justin Trudeau? That’s the kind of foreign policy you expect from Liberals. You can be sure nothing will change under his leadership.

Erin O’Toole won’t use article 92(10) of the Constitution to ensure we build pipelines.

Erin O’Toole won’t repeal bill C-16 that imposes a radical trans agenda on Canadians. He won’t do anything to restore and protect our freedom of speech.

On every major issue, the Conservative Party under Erin O’Toole will be just like the Liberals. What else can be expected from the leader of the Liberal-lite Party?

On each of these issues, the People’s Party is the only national party offering a clear, consistent, conservative vision.

I know that real conservatives are disappointed today. Especially those whose first choice was Derek Sloan or Leslyn Lewis. Or those who supported Jim Karahalios, who was shamelessly kicked out of the leadership race by the party’s establishment.

I want to tell them today: There is a place where you can fight openly for your values. Where they won’t be disparaged or shut down, but will be proudly championed.

You have a home. It’s the People’s Party of Canada.

We’re the fastest growing party in Canadian history. We accomplished more in our first year than the Green Party did in 20 years and 6 elections.

Nothing will change unless those who want change stop wasting their time, and their votes, on parties that will never bring any real change.

The door is open. Join the People’s Party. Thank you.