By now, you must have seen the disturbing images out of Montreal. 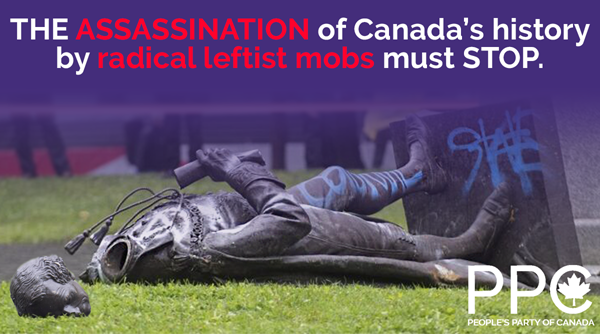 The statue of Sir John A. Macdonald, Canada’s first Prime Minister, was toppled and decapitated a few days ago.

A crazed leftist mob destroyed it in an attempt to erase Canadian history.

The worst part of all of this: the Montreal Police were nowhere to be found!

The criminal mob was allowed to carry out their destruction with impunity.

We’ve seen this disorder and anarchy south of the border for months; rioters and agitators run amok while the police are held back from doing their jobs.

I know Canada can do better.

We need to protect our history —all of it— so that future generations can learn from it.

That is why I am in favour of harsh consequences for those who desecrate the public space with dangerous antics.

We have seen what happens when the police can’t do their jobs!

We can’t win this fight alone. We need to show those who attempt to erase our history that Canadians will not stand for it. Will you sign our petition to get the City of Montreal to restore the statue of Sir John A. Macdonald?

Please also consider a $2 donation to the People’s Party so we can continue to spread the message of preserving Canada’s history.

Join our team of supporters and help us bring freedom and prosperity to Canada!

Become a member or renew your membership

Not a member of the People's Party of Canada? You can still sign up to receive our newsletter!

(PPC members don't need to sign up; they automatically receive it.)

If you opted out at some point but want to opt in again; please use this form.